What is “cataract” most often associated with? In general, cataract is defined as a layer which covers the eyeball. Treatment is very easy – it is possible to remove the layer, and proper vision is restored. Unfortunately, it is not that simple. In order to improve the quality of vision the cornea must be removed and replaced with an artificial one. This is a complicated and precise surgical procedure which can only be performed by an ophthalmic surgeon. It can be carried out on anyone: even very young children (in the case of innate cataract) and even centenarians! If the ophthalmologist diagnoses cataract – do not delay the surgery – since it may transform into a mature cataract, the untreated complications of which can sometimes lead to irreversible sight loss.

Due to the fact that we patronise the exceptional charity campaign “Salvation for Eyes – Free Cataract Surgeries” we decided to write a little bit more about cataracts. In order to guarantee the best understanding of the reasons and effects of this disease, in the first paragraphs of this article you will find out more about the cornea itself and the optical apparatus etc., and in subsequent articles we examine cataract treatments.

Eye accommodation mechanism
The conjunctiva changes its curvature during accommodation, which defines the eye’s ability to focus light beams on the retina reflected through viewing objects located at different distances from the eye enabling clear vision at close and far ranges (definition according to the pioneering eye-care physician William H. Bates). Upon accommodation the shape of the conjunctiva changes as well as the shape of the eyeball. The change in length of the eyeball happens with the participation of the muscles located outside the eyeball.

A fragment of the film “The evolution of the human eye” (credits: Joshua Harvey), showing how conjunctiva functions:

The conjunctiva constitutes part of the optical apparatus and participates in the process of forming an image.
Briefly, the entire process takes place in the following way: light (a set of photons) is reflected through objects covering the cornea: the aqueous humour, the conjunctiva and the vitreous body to finally reflect across the retina. It is said that the image is focused on the conjunctiva. After this, the nervous system takes over. In this short film the whole process of forming an image is shown beautifully:

Cataract as the main cause of blindness in the majority of elderly people
Cataract (cataracta) can affect all people, but in the majority of cases, sufferers are in their fifties. Sight deterioration is the first symptom. When it is hot outside or on a bright winter or spring day you might notice a flash of light before your eyes – a kind of “lightning”. After sunset or on a cloudy day you can see a lot better. As time passes your eyesight gets worse and worse, and performing simple everyday activities becomes very difficult.

Unfortunately you cannot prevent cataract by leading a healthy life style or adhering to a specific diet! Similar to hair greying and wrinkles appearing, it is natural. The speed of progression of the illness depends on one’s vivacity, disposition and hereditary characteristics and sometimes may result in the conjunctiva’s becoming totally clouded. It may also appear in both conjunctivas!

Does cataract affect only elderly people?

It appears it does not. A small percentage of patients diagnosed with cataract have congenital cataract, including children! In 90% of patients examined, it develops as a result of body aging, most often affecting persons between 70–80 years old.

Can cataract surgery be postponed?

Never, ever! You should get rid of cataract as soon as possible. These days the procedure can be performed at any stage of the illness. It is simple and efficient – later complications appear very rarely.

Why are regular tests so important?

A similar symptom, i.e. a white reflection from the retina, appears in the case of eye cancer. The difference is the cause – namely, damage to RB1 gen (chromosome 13), which is responsible for developing a carcinoma called retinoblastoma. It can develop even in young people and newborns!

You can find out more on the symptoms and causes of CONGENITAL CATARACTS WHICH ALSO APPEAR IN CHILDREN in a previous post: “Cataract – lens clouding: causes and symptoms”.

When cataract is in its early stage it may be easily discovered during a routine ophthalmology test. In order to precisely evaluate the degree of lens clouding the ophthalmologist applies eye drops widening the pupils and then assesses the eye anterior segment using a slit lamp. In the photograph below you can see a slit lamp in action at our office in Warsaw (Jana Pawła II Avenue 80/130, 21st floor of Babka Tower): 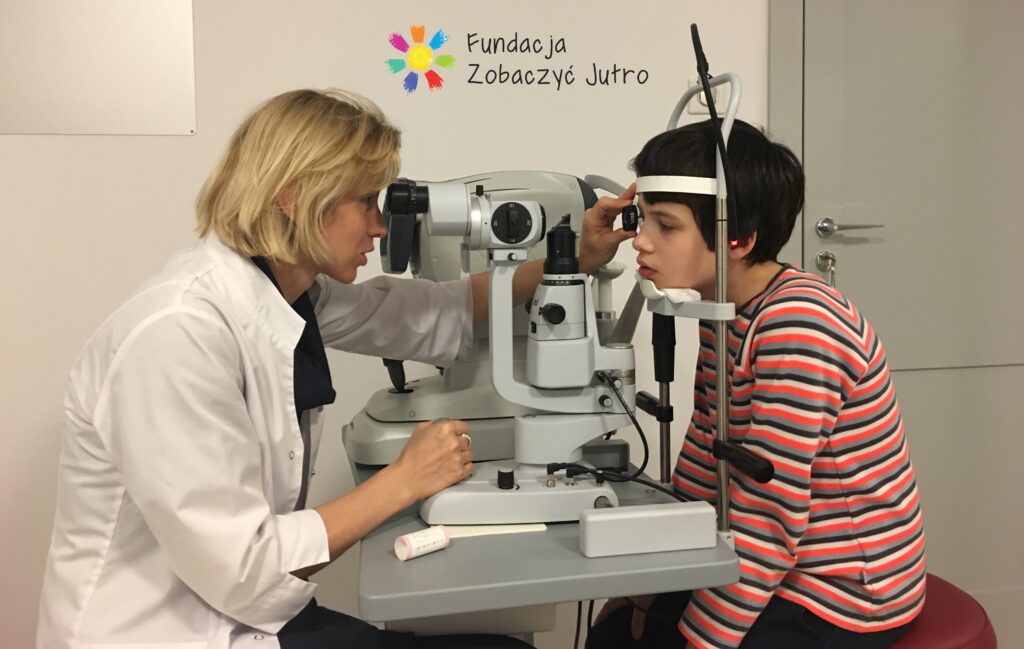 Eyeball without per orbital muscles visible:

Cataract, similarly to squint-eye, does not disappear by itself. And there are no eye drops to cure cataract. Scientific research has proved that there is no medicine which can eliminate or reverse lens clouding. The one and only effective way to treat cataract is surgery.

After surgery you’ll see the world in all its glory!
Right after surgery, vision will still be clouded but as time goes by (usually after a few hours) it will become more and more clear. After a day, eyesight should be improved. Usually, a few days after surgery you will be able to see much better! The world regains its clarity and colours, and the majority of patients don’t need glasses to see things far in the distance. If they are needed after all, the adjustment is recommended 6–8 weeks after surgery (depending on the degree of “breaking power” of the lens, short-sighted or long-sighted glasses will be necessary). Depending on the kind of lens which has been implemented you should see much better than before surgery! The National Health Fund only refunds procedures in which monofocal lenses are used. It may be decided to use lenses which enable good vision near and far and even eliminate astigmatism (so-called torus lens). These kind of lenses are not covered by a NFZ refund – they are paid for by the patient. The cost is approximately PLN 4000.

With modern surgical technology, which enables fast and stable healing, a complete lack of any physical activity after the procedure is not advised. Some patients return to their favourite – sometimes extreme – sports activities after two days. Most importantly, however, do not allow the eye to come under any pressure.

What are the most common methods of cataract treatment?

Commonly, two ways of cataract surgery are performed:
Phacoemulsification, in which a small incision is made in the eye (2–3 mm) into which a probe is inserted and the lens broken down with ultrasonic frequency. The probe is subsequently removed from the eye.

Fluid emulsification, which breaks down and removes the lens with a compressed stream of fluid.
Modern equipment used in cataract surgeries makes it possible to use either method while at the same time increasing the effectiveness and safety of the procedure. An ophthalmologist surgeon removes the clouded lens and subsequently implements – via the same incision – a flexible lens, which may be rolled up without any difficulty – the lens adjusts itself to an appropriate shape after being placed on the eye! No stiches are needed as the incision closes itself under the influence of the pressure inside the eyeball (so-called IOP – inter ocular pressure). The bag in which the natural lens was placed remains undisturbed.

The implant grows and will last the lifetime of the patient. The artificial lens is durable and rejection (allergy) does not occur. No medicine is needed after surgery.
A typical artificial lens is an optically active plate (diameter 6–10 mm) fastened on two flexible hangs whose role is to keep the lens in a bag.
There are many models of artificial lens available on the market and they differ in shape, size and material.

TIDBIT: Despite the fact that cataract is very often noticeable in both eyes, it is never operated on in both eyes at the same time!

How long does cataract surgery usually last?
Only 10 to 25 minutes. The surgery is performed in outpatient mode, usually under a local anaesthetic administered in eye drops.

–> The application of local anaesthetic and the appearance of non-invasive operating techniques have enabled the performance of surgery in patients who only several years ago could not undergo such treatment. These patients commonly suffered from systemic diseases such as diabetes, atherosclerosis, hypertension, leukaemia etc.

Possible undesirable difficulties (complications) which may occur after cataract surgery
After cataract surgery pain may occur, eye redness, swelling as well as annoying photophobia. In such cases an ophthalmologist appointment is necessary in order to discover the reason for these symptoms.

Dear reader, if in your family there is a history of inborn cataract, you and your children are in a risk group. Do not put off making an appointment with an ophthalmologist, and make sure your child pays regular visits to the ophthalmologist for checkups.

The charity campaign “Salvation for eyes – free cataract surgery” was established by the CMP Foundation – Czy mogę pomóc (Can I help?). Their aim is to finance or subsidise cataract surgery for people who:
– have been diagnosed with cataracts (documented medically),
– are in need of quick surgery and the queuing time for surgery within the National Health Fund (NFZ) scheme is too long,
– are not able to finance the medical procedure and are suffering from this illness,
– are inhabitants of Warsaw or Piaseczno Municipality.

We encourage you to read the following notification on the CMP Foundation website: http://czymogepomoc.pl/o-fundacji/zgloszenie/.

An application will be taken into account only if you deliver all required attachments (the list of required documents is provided in the notification).

We invite you to register for a checkup with a paediatric ophthalmologist and register for an orthoptic diagnosis with our certified orthoptist. Contact us on 22 266 09 95. Or write to us at biuro@zobaczycjutro.org. We are waiting for the next little Patients!

See our gallery of Little Heroes and Little Heroines who have already paid us a visit at our orthoptic and ophthalmologist office in Warsaw: GALERRY